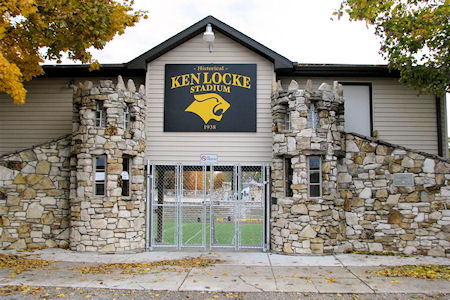 What is now known as Ken Locke Stadium was originally named the Knoxville Works Progress Administration (WPA) Pool and Athletic Field District. It was constructed of stone with a rustic medieval touch. The oldest structure of the stadium is the city water tower that was constructed in 1922. The landmark is now recognized by the State of Iowa Historical Society and is listed on the National Historic Registry. A priority plan has been developed to historically repair and preserve the stadium in four stages over four years. Stages may be completed sooner with successful fund raising efforts. Repairs for the first stage were completed in time for the 2007 football season.